The Three Sisters of Fate

Referred to in Mythology is the Moirae (the allotters), or the Fates; Clotho, Lachesis, and Atropos, were the daughters of Zeus. As the three Sisters of Fate, Lachesis, Atropos, and Clotho, determined the fates of every mortal, God, and Titan.

The Fates have the subtle but awesome power of deciding a man’s destiny. They assign a man to good or evil. Their most obvious choice is choosing how long a man lives. There are three Fates.

Clotho, the spinner, who spins the thread of life. Clotho weaved the Threads of Fate, beginning all lives. Clotho carries a spindle or a roll (the book of fate),

Lachesis, the measurer, who choses the lot in life one will have and measures off how long it is to be. Lachesis embellished the threads, which decided the events that would occur in every being’s life. Lachesis usually is portrayed  with a staff with which she points to the horoscope on a globe,

Atropos, who at death with her shears cuts the thread of life, ending a life. Atropos usually is portrayed  with  a scroll, a wax tablet, a sundial, a pair of scales, or a cutting instrument.

Consistently portrayed as three women spinners, each of the three Fates had a different task, revealed by her very name: Clotho spun the thread of life, Lachesis measured its allotted length, and Atropos cut it off with her shears. Sometimes, each of the Fates was assigned to a specific period of time: Atropos – the past, Clotho –the present, and Lachesis – the future. 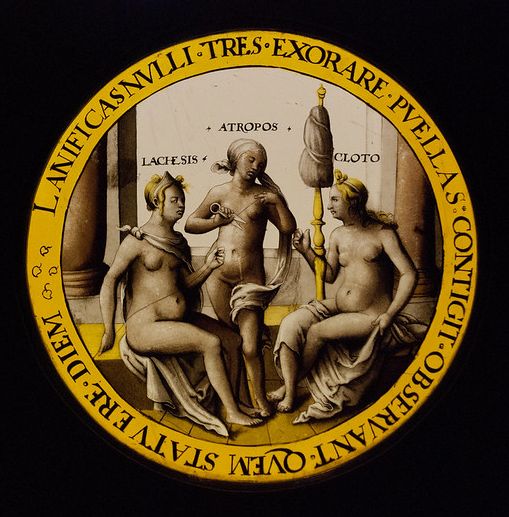 The representation of the Fates evolved through time, and it seems that it often depended on the medium through which they were portrayed. Thus, in the visual arts, they were usually depicted as handsome women, but in literature, they are often imagined as both old and ugly. Any case, they are almost always pictured as weaving or binding thread. Sometimes, one – or all – of them can be seen reading or writing the book of fate.
Source: https://www.greekmythology.com/Other_Gods/The_Fates/the_fates.html

The Fates are old and predate the gods. It is not entirely clear how far their power extends.  In any case, not even the most powerful is willing to trifle with them. The Fates held power over even divine entities, such as Zeus or Gaia. Mythology said that the powers of the Fates was absolute, even for Zeus.